Delivered by Rebecca Archer (nee Hyam) – an international journalist, presenter, and producer with more than 22 years of in-depth media experience.

by an experienced ABC/BBC journalist & presenter

by a PRIA award-winning international broadcaster

from a current working journalist 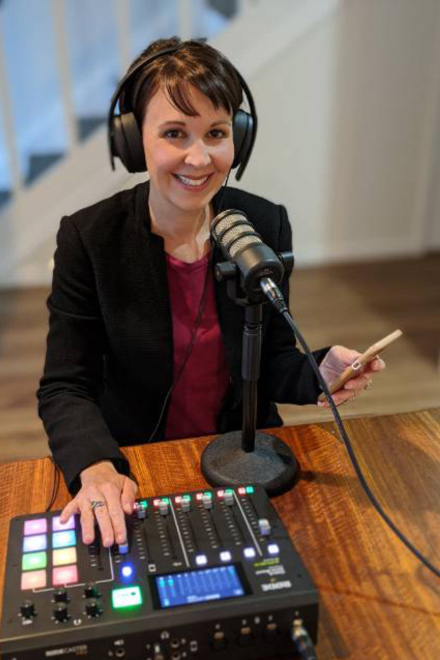 Rebecca Archer facilitates large corporate training days, smaller group workshops and 1:1 coaching sessions, preparing clients for media interviews, using the highly effective and proven technique known as the Media Skills Methodology. This bullet-proof, easy-to-navigate communication strategy will ensure you stay in control of every media interview, delivering your key messages to your target audience.  Rebecca combines the theory with a range of audio and video news media clips which show case the Media Skills Methodology in action.  The workshops also involve intensive practical exercises, so that each person will emerge with a comprehensive command of their new communication skills.

Rebecca’s podcast hosting and production services draw on a wealth of leading presentation, editorial and production skills to help clients strengthen their existing relationships and reach entirely new audiences.  The popularity of podcasting is growing exponentially around the world, and it is among the most interesting, informative, and immediate platforms for achieving your communication goals.  An accomplished broadcaster, having first worked in radio in 1999, Rebecca has hosted a range of podcasts, and can provide intensive presentation training and practical guidance for any budding podcasters within your organisation.

Rebecca’s role as an accredited media trainer and award-winning podcast producer is supported by more than two decades’ experience as a broadcast and digital journalist, presenter, and producer.

Starting out in Brisbane in 1999, Rebecca reported for the ABC’s Digital, Radio and Television newsrooms, before honing her live-to-air broadcast skills as a news anchor and producer at ABC NewsRadio. Moving to the UK in 2004, Rebecca worked as a broadcast journalist and producer for BBC World Television News and Sky News in London, covering stories including the Boxing Day tsunami, the insurgency in Iraq and the death of Pope John Paul II.

On returning to Australia, Rebecca accepted a role at SBS World News in Sydney, before moving into a senior journalist position in the ABC’s Business and Finance bureau in 2007.   She reported on the events leading up to the Global Financial Crisis and when the full impact of the turmoil began to unfold, Rebecca was instrumental in directing the network’s coverage.

Throughout the course of her career, Rebecca has tackled almost every newsroom role – from sub-editing, producing, reporting, and presenting, to chief of staff duties (assigning reporters, camera operators and associated resources to stories).  She has lived and breathed news and current affairs her entire career and can provide invaluable insights into how social media has changed newsgathering and reporting.

As an experienced journalist and presenter, Rebecca has time and again seen media opportunities go begging, or strong, smart people crumble under the pressure of their moment in the spotlight. The desire to help people thrive in interviews and achieve maximum exposure for their business, organisation, or cause, is what prompted Rebecca to move into media training.

Rebecca has a Bachelor of Arts majoring in Journalism from the Queensland University of Technology and a Certificate IV in Training and Assessment, covering all aspects of Adult Learning Principles.

Sessions are tailored to your needs, with bespoke content designed to suit beginners, occasional spokespeople, or expert media commentators, who are keen to freshen up their skills.  These can be booked in person or online – using web-based platforms such as Zoom.  From 1:1 intensive coaching workshops, to small groups of up to six people, or large corporate training days, Rebecca will facilitate a dynamic and interactive session, which equips people with techniques to tackle the toughest of media interviews.

The recording of podcast episodes can be completed either in person or virtually, using the Rode Podcaster Pro suite of equipment.  Rebecca Archer is available to host, produce, consult, and script your podcast series.  She will provide advice on how to source theme music and the best publishing platforms to use when episodes are ready for broadcast.  Production turnaround will be swift, with flexible arrangements for tight deadlines and in terms of editing requests.

Like media training, these workshops can be designed to suit the specific needs of your organisation.  Whether you have a seasoned spokesperson requiring some extra polish, or someone fresh stepping into a very public-facing role, these sessions will build confidence in a calm, supportive, non-threatening environment.  Participants will learn about the importance of non-verbal communication skills, vocal tone, and best practice in the planning and preparation of a public presentation.

While committed to putting people through their paces during her media training workshops, Rebecca employs a supportive and encouraging approach. Sadly, she often hears feedback about people having been ambushed and humiliated in media training sessions with other providers. This unfortunate and completely unnecessary experience has made those people reluctant to face the media as a spokesperson, denying themselves and their organisation the spotlight and coverage they deserve.

Unlike many media trainers, who have spent years working outside of journalism, Rebecca has experienced the social media revolution and its impact on the media industry first-hand. She brings a fresh, insightful approach to the way social media is shaping how newsrooms cover stories.

For the majority of her career in journalism, Rebecca specialised in the reporting of business and finance news. As a result, Connect Media Training and Podcast Production can help organisations in this sector tell their stories in a compelling and memorable way, reaching new viewers, listeners, and readers. Rebecca will help cut through the jargon and capture the attention and imagination of your key audience.

As a broadcaster with more than two decades’ experience in presenting and producing news and longer format current affairs, Rebecca is perfectly placed to bring clients’ podcast ambitions to life. Her cutting-edge editorial judgement will ensure the best angles are covered and Rebecca’s award-winning production skills will deliver content that truly captivates and engages audiences.

Connect Media Training and Podcast Production is not a public relations firm and therefore dedicates 100 per cent of its time and resources to tailoring and delivering training packages, and audio production that offer the best results for clients.  This also means Rebecca is available to partner with established PR agencies to help directly facilitate media training and podcasting to their clients.

Without the significant overheads of a large firm, Rebecca can offer extremely competitive rates and fees for her services.  She has a huge personal investment in her business and gets enormous satisfaction from seeing people she has worked with succeed in the media, as spokespeople and podcasters.

Media Training Q and A with Rebecca Archer

Gain traction in the media and become an expert spokesperson for your industry.

Rebecca will work with you to craft creative and memorable key messages that guarantee media coverage.

Canstar:
Rebecca’s background in personal finance has provided an added benefit for training up Canstar’s finance experts for being in the media spotlight, however, her expertise has equally lent itself to executive and presentation training among other staff in the Canstar Group.  Thanks to Rebecca’s coaching, we now have a number of highly skilled media spokespeople presenting weekly on national and metro television and radio, and in a multitude of print and online media articles.
www.canstar.com.au

CCIQ:
A particular asset was the practical interview portion of the training, which were recorded and supplied to the team. The ability to watch these again meant we could self-evaluate our improvement during the training and use as critical analysis in the future.
www.cciq.com.au

MediaCast:
We constantly receive feedback from our clients on the level of professionalism and expertise Rebecca demonstrates in a session. They finish their training buzzing with excitement, feeling fully equipped to handle interviews and confident they know their campaign key messaging thanks to Rebecca’s thoughtful guidance.
www.mediacast.com.au

QPS:
Rebecca’s knowledge and experience within media provides a great insight into how clear, descriptive and persuasive communication can be used to drive the narrative.
www.police.qld.gov.au

BBS Communications:
Our team and our clients find significant value in the real-world insights Rebecca brings to her training sessions, honed through her ongoing relationship with media networks, including ABC Queensland.
www.bbscommunications.com.au